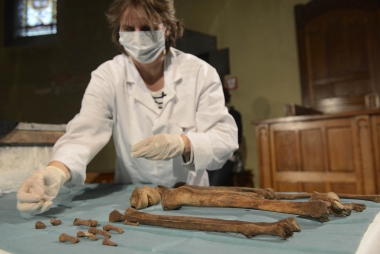 Historical tradition would have us believe that the bishop buried at the priory of Oignies in 1241 and the owner of the mitres that form part of the Treasure of Oignies were one and the same person, namely Jacques de Vitry, a religious dignitary and patron, who died in Rome in 1240. Such affirmations, however, have never been proved or disproved. To get to the bottom of this theory, the Archaeological Society of Namur, with support from the King Baudouin Foundation, has launched the CROMIOSS scientific project, which involves crossover research in history and exact science on the mitres and remains of Bishop Jacques de Vitry.