The peregrinations of the Treasure

The peregrinations of the Treasure

Up until the first half of the 17th century, the little community of Oignies and its treasure were relatively well protected from the tumults of history. It is true that the need for money sometimes obliged the monks to sell one or other of the works, but this did not imperil the coherence of the ensemble. Then, however, came a troubled period provoked by the wars of the King of Spain against the United Provinces. The region of Entre-Sambre-et-Meuse was the theatre of violent combats and this led the Prior of Oignies to place its treasure momentarily in safety. After a full inventory had been made, the treasure was hidden in the priory refuge, in Namur.

In 1748 came a new ordeal. At that time, Oignies was part of the territory of the Holy Roman Empire, headed by Emperor Joseph II of Austria. The Emperor had launched an important series of reform of his states, which affected the clergy in particular. He decided, no less, to reduce the number of seminaries and to suppress those congregations and contemplative orders judged to be of no use. His grand design was to subjugate the Church to his single and unique wish of enlightened despot. Within the little priory, there was desperation. It was decided to hide the treasure once more.

The winds of revolution that came crashing down on France dragged Europe into war. In 1792, Oignies and the surrounding region fell under French rule. This period was accompanied by trouble and violence towards religious communities. Fearful for the treasure, Dom Grégoire Pierlot, Prior of Oignies, walled up the works in the recess of a farm in Falisolle, which was part of the monastery. Two years later, the Directoire decreed that religious orders should be suppressed and their belongings confiscated. The community of Oignies was dispersed, whilst its prior became curate and then chaplain. On learning of the death of the farmer in Falisolle, Dom Grégoire, the last survivor of his community, went to recuperate the treasure that was still hidden at the farm. He decided to provisionally entrust it to the priest of Falisolle, who cared for it in the sacristy of his church.

The Sisters of Notre Dame of Namur 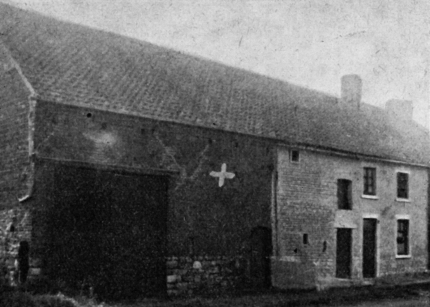 The farm of Falisolle where the last Prior hid the Treasure of Oignies. The cross marks the place where it remained hidden for 24 years, until 1817.